The 2014 Memorial Day at Penn’s Landing brings a bittersweet memory for the Vietnamese American Community of Philadelphia.

After 39 years of refuge in the U.S., most of us are contented with our lives here — a life that none of us had planned. However, as the first generation of Vietnamese Americans, we live in this country on borrowed time. Deep down inside, we all are in pain with an aching heart, longing to return to the homeland where freedom remains a distant memory.

The yellow flag with three red stripes has become a relic of the Vietnam War that will forever remain a unique symbol of freedom. Millions of young Vietnamese men and women lost their lives fighting for it. Over fifty-eight thousand American soldiers perished, and hundreds of thousands were wounded while helping us to defend our democracy. Many people in our community have been dreaming of “homecoming” to a free Vietnam. They have been working tirelessly with the Philadelphia Vietnam Veterans Memorial Fund Board to secure a monument for the flag of the Republic of South Vietnam. Their dream has come true on 2014 Memorial Day at Penn’s Landing in Philadelphia.

These individuals had persistently pursued a dream of having the Republic of South Vietnam’s heritage flag flying side by side with the American flag at Penn’s Landing Philadelphia Vietnam Veterans Memorial. I applaud the dedication and contribution of those who have served the Vietnamese community selflessly. They shall remain nameless; they have diligently and silently taken on this mission, considered their last, to make this dream a reality. They will forever remain unknown soldiers, and Penn’s Landing shall be their witness.

Listen! Our children. We know our work has yet to be completed, but we have done our best to lay the foundation for you. It is time for us to hand over the torch of freedom. The United States of America is your country, and you should say it proudly. Remember to honor and serve it with all your heart, just like we proudly served the flag of the Republic of South Vietnam to uphold the freedom it represents. You must never forget!

Our time in this free country is gradually coming to an end, but so much is waiting for you to finish. You must strive to do your best to make us proud. Our last wish is that you must first seek to excel in education and be the best you possibly can be in whatever field you want. After that, take advantage of the freedom this country gives you so you can provide for your own family and to become a contributing citizen of your country. Please do not take anything for granted because even freedom has its price. Aim high in your dream to become an outstanding citizen of this country, and then you can exercise your knowledge and influence to help build a FREE Vietnam.

We shall wait for that day to come so you can take us home even though after we are nothing but ashes.

From a father and an uncle.
Jim Huynh

THE TALE OF MOTHER VIETNAM

1. I had 100 children born from the legend “Rồng Tiên.”
After 4,000 years of upheaval with frequent blood and fire,
I survived with 96 million children of mine.
Millions of them have left me with guilt they couldn’t hide.

2. When I was a young girl two millennia ago,
The brutal Chinese conqueror forced me to become his mate.
My two girls, “Trắc and Nhị,” blew up with thunderous rage,
Charging their elephants to butcher those barbaric faces. (40 AD)

3. How much more strength could my two girls need,
To fight off the Han Chinese advancing like savage beasts.
The heroic sisters’ revolt held them off for three years,
Hopelessly outnumbered, my girls ended their lives without fear. (43 AD)

4. Ngô Quyền, my dearest son whom I put to the task,
To rise for vengeance even after a thousand years had passed.
Vowing to turn “Bạch Đằng River” into a Chinese burial place. (938 AD)
Knowing his resolve, the Chinese couldn’t hide their shivering faces.

6. After World War II, I thought my ordeal was over,
But the shameless Frenchmen returned to claim me forever. (1946-1954)
“Go away French!” But they looked at me with disdain,
Enraged, do-or-die! I drew up my battle plan.

7. Điện Biên Phủ! Here I come to teach those bastards.
I surrounded and bombarded them with artillery fire.
France surrendered, then the U.S. intervened. (May 7, 1954)
On July 20, 1954, they cut my body in half at the parallel 17th.

8. My Northern children endured scanty rations of food and clothing.
By nightfall, “Uncle Hồ” reminded them to keep watching.
The Southern children learned to help and protect each other,
Awaiting weekends for movies and soccer games in the offer.

9. But Mom’s life was still laden with misfortunes.
Peace was short-lived, in just a few years, then out of tune.
“Go South!” Uncle Hồ ordered his weary troops,
“Take over the South by any means in the Red Book.”

10. On April 30, 1975, my body was sewed back into one piece.
“Liberation!” But why did one-half sob and the other half laugh?
The Northern children charged into the South to claim their precious loot.
The Southern ones scrambled to the sea without one last look.

11. Mom asked, “How many died in the vast sea?
How many perished in the unsympathetic jungles?
How many girls and women were savagely raped?
And how many bodies became treats for the fish?

12. I agonize because my children are tormented.
They were braving the rough sea for a life of breathing free.
Their peaceful lives are now in jeopardy,
Those bastards are here to trouble us.

13. Đàm Vĩnh Hưng is the most hated name.
The brainless barber first sings for food and now for fame.
The communist party thanks him for its financial gains,
When he sings lullabies for his feckless fans.

14. For crying out loud, so many “Việt Kiều” foolish youths.
They’ve been flooding California and now Philadelphia.
When he comes, he will face shouts and jeers,
And the “Anti-communist flame” many Vietnamese hold dear.

15. The VC hummer is a singer for hire.
If there weren’t promoters, we wouldn’t waste our time.
Deterring them is like using a stone to kill two birds,
This tactic always works if we stop show promoters first.

16. It’s great that the VC hummer hasn’t made any sound.
His whereabouts are nowhere to be found.
So, I grabbed a beer and a roasted squid – a time to relax,
Suddenly came the news, “Tri Quang” had breathed his last. (Nov. 8, 2019)

18. Those who were no longer able to hold their boiling temper,
Beginning to spew malice at Trí Quang’s death to release their anger.
Some reviling Quảng Đức’s decades-old self-immolation protest
And alleging that he was barbecued alive by punk Buddhist monks.

19. Buddhists continued their chanting, “A Di Đà Phật.”
They believed in the miraculous heart relic that Quảng Đức left behind.
The self-immolation monk had fulfilled his sacrifice. (June 11, 1963)
While Catholics bowed their heads, “Yes, Father and Dear God.”

20. Mother saw that you take your Gods to the internet,
Using Jesus and Buddha to settle your scores.
You wanted to prove your God is gold and the other’s brass.
The same way you placed bets in a soccer match.

21. Alexandre de Rhodes scolded us in a flash:
“Without me, you Vietnamese wouldn’t have written language.
Because of me, you’ve followed Jesus and Christianity.
I’d paved the way for Vietnam to become France’s colony.

22. Thanks, but no thanks, Alexandre de Rhodes!
“Oui, Monsieur,” O – U – I was our first lesson.
In a little while, we forgot our ancestral instructions.
Some stopped “Mô Phật” and began “Amen” to God.

23. The Frenchmen wanted us to become their buffaloes and horses.
They colonized us for their Mother Imperial France.
One hundred years exhausted the patience in my plan.
Mom rallied Việt Minh to rise and kick their butts.

24. But the Frenchmen kept acting like savage beasts,
Continued to patronize Vietnam after their surrender at Điện Biên Phủ.
Finally, they made a pact to head South with a million Viets,
Among them were Emperor Bảo Đại and the Catholic clan of Diệm.

25. After one year, Diệm found faults with the Emperor,
Forcing Bảo Đại to abdicate and showing Frenchmen the door. (1955)
Naming himself president of the Republic of South Vietnam (1955-1963)
While Uncle Hồ ruled the communist North with a ruthless hand.

26. But Mom’s life was still laden with misfortunes.
Peace was short-lived, in just a few years, then out of tune.
“Go South,” Uncle Hồ ordered his weary troops,
“Take over the South by any means in the red book.”

27. On April 30, 1975, my body was sewed back into one piece.
“Liberation!” But why did one-half sob and the other half laugh?
Northern children charged into the South to claim their precious loot.
The Southern ones scrambled to the sea without one last look.

28. Mom asked, “How many died in the vast sea?
How many perished in the unsympathetic jungles?
How many girls and women were savagely raped?
And how many bodies became treats for the fish?

You Must Learn to Save Yourself

29. Mom’s sad and does not know what else to do.
You children snarl at each other like a pack of wolves.
Because of the rigid Roman Catholic religious doctrine,
You continue to feud with Buddhism — saying it’s bad faith.

30. Both hatred and love come from your heart.
Although you are not related by blood, you are all my children.
Fellow countrymen should treat each other with understanding.
For graveyards in Vietnam, you only see “Amen” and “Mô Phật.”

31. Children! Your fate may have been sealed.
Lý, Trần, Lê, and Nguyễn could soon become Xi.
If you don’t wake up before it’s too late,
Vietnam will begin its new colonial fate.

32. During the Vietnam War, you killed each other with bombs.
Today, you settle old scores with mouths and loudspeakers.
“Down with Vietnam communism!” whenever the VC singer appears.
“Đả Đảo Việt Cộng” loudly so he can hear.

33. Nature had its tussle between the sea and mulberry valleys.
So had our societal scuffle lamented our hearts. (The Tale of Kieu)
Independence has been with us for more than forty years.
Why you’re still in bed with China — are they your peers?

34. The Chinese army has marched toward our doorstep,
And why are you still deep in your fucking sleep?
Vietnam, arise from your damn slumber!
Arm your people with the resolve to defend your borders.

35. It was your ignorance that Mom couldn’t undo.
You didn’t know that Lenin and Uncle Ho were evil, too.
But now you know how bad they had been.
Wake up and undo the mistreatment of your kin.

36. Vietnamese people are known for their bravery.
They always stand up to face any mighty enemies.
Fighting China, defeating France, sending home Yankees,
But don’t be an asshole to fight each other for the world to see.

37. Millions of Vietnamese people like me,
Longing for homecoming under Vietnam’s democracy.
Losing parents – we will ease the pain over time,
But by losing our country – we’ll become buffaloes for life.

With Heaven Rest All Things

We create our karma–
Let’s stop decrying Heaven’s whims and quirks.
Inside us, there lies the root of all things,
And a good heart outweighs all talents one has.

May these crude words that are carefully culled
Beguile an hour or two of your long night.

(The Tale of Kiều’s excerpt) 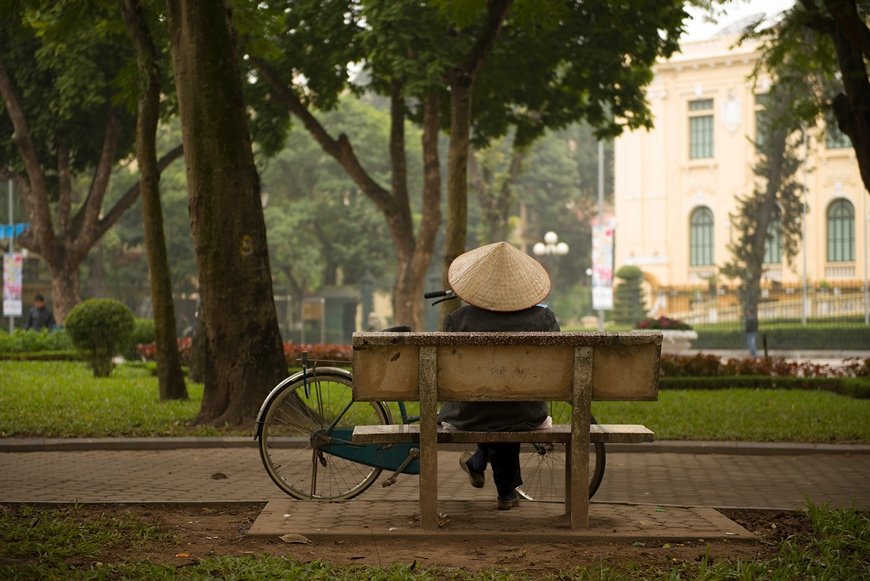